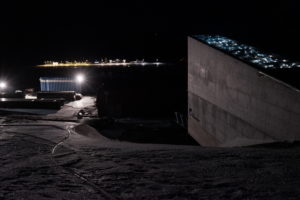 The measures are part of a long-term plan to further secure the Seed Vault for the future. The Norwegian government is now proposing a startup grant of 100 million NOK in 2018.

The construction improvements that we hope to start very soon will ensure that Svalbard Global Seed Vault, offers the world’s gene banks a secure storage space for seeds.

– It is a big and important task to take care of genetic material crucial for global food security, says the Norwegian  Minister of Agriculture and Food Jon Georg Dale.

Commissioned by the Ministry of Agriculture and Food, Statsbygg has prepared a preliminary project, that includes the construction of a new access tunnel in concrete and a service building for placing emergency power and cooling units and other heat emitting equipment outside the Vault construction.

Read more about the project at Statsbyggs’ webpage

– In 2017, the important role of the seed vault was again confirmed when, for the first time, withdrawn seeds were re-deposited in the Seed Vault. The ICARDA International Research Center, previously operated in Aleppo in Syria, sent back seeds that were multiplied after retrieval of seeds from Svalbard in 2015.

– It proves that the Seed Vault is a worldwide insurance for food supply for future generations, says Jon Georg Dale.

On February 26, the Minister of Agriculture and Food celebrates that it is 10 years since Svalbard Global Seed Vault was officially opened in Longyearbyen. From the 25th to the 27th of February depositors and partners from all over the world are gathered in Longyearbyen to attend the “Seed Vault Summit”, and to be present when seed deposits 23 international and national gene banks are brought into the Seed Vault.